IMMERSE INTO THE 4TH DIMENSION

Step into the Cyberfilm Festival where you will be greeted with a red carpet experience and a playful giant popcorn box, celebrating the production and methodology of the immersive worlds of 3D animated films.

Animated films transpire in rich, highly complex 3D environments. Although we mostly experience these worlds as 2-hour films, each one is carefully designed and crafted by the director and his artistic team as a full story universe. The Cyberfilm Festival translates this world and the film's 3D assets into fascinating geometries that evoke users' interactions with eachother and the movie worlds. As COVID has affected many film festivals and conferences around the world, the resulting online versions are a shadow of their real counterparts. The Cyberfilm Festival attempts to solve this real world problem by translating the key elements of festivals (interactions, networking, discussions) into digital counterpoints and merging them with immersion and playfulness that only the virtual can provide.

Immersive panels open up the 3D assets from the films in an approachable 1-to-1 scaled experience. Meet and greet the stars of the 3D films in a new way. Voice actors use the avatars of their film characters for film panels, interviews and discussions with festival goers. Like in reality, visitors are able to take photos with the character avatars to share on social media. 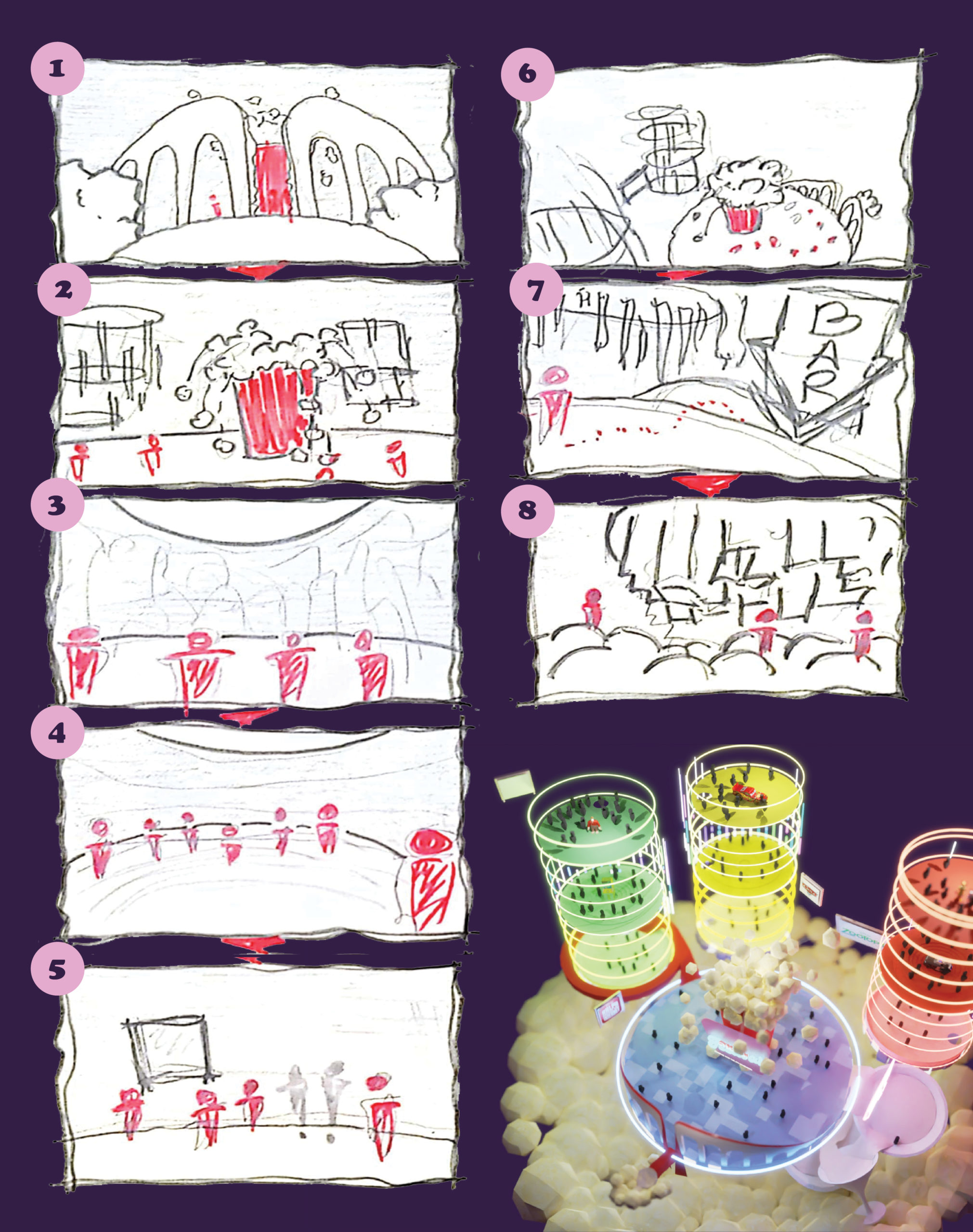 STEP INTO THE ANIMATED WORLDS

The Cyberfilm Festival is for animated 3D film festivals. Due to COVID, actors and filmmakers are no longer attending these events in-person, which is highly impactful as the festivals are heavily reliant on human interaction.  By taking advantage of the possibilities of multi-player virtual reality, the Cyberfilm Festival adds a new dimension to film festivals: walk through 3D scene projections from the featured movies, meet actors with avatars of their voice-over characters, and immerse users in the rich environments of the 3D animated story worlds.

THE CYBERFILM FESTIVAL IMMERSES YOU WITH OTHER FESTIVAL GOERS IN THE 3D WORLDS OF THE ANIMATED FILMS.

Users spawn in front of a giant popcorn box surrounded by giant popcorns with a red-carpet path leading before you. Aferwards, they enter the lobby space with various selections of movie worlds, where you’ll meet with other festival goers. Those who want to network or chat can go to the ‘bar’ for more private conversations. Users teleport to move between floating islands in a vertical movement to explore the assets, panels and worlds for each of the films.

Users with different passes will have their unique avatars to represent this. The avatars showcase their professions and status at the festival which, in-turn, grants access to different levels or interactions. 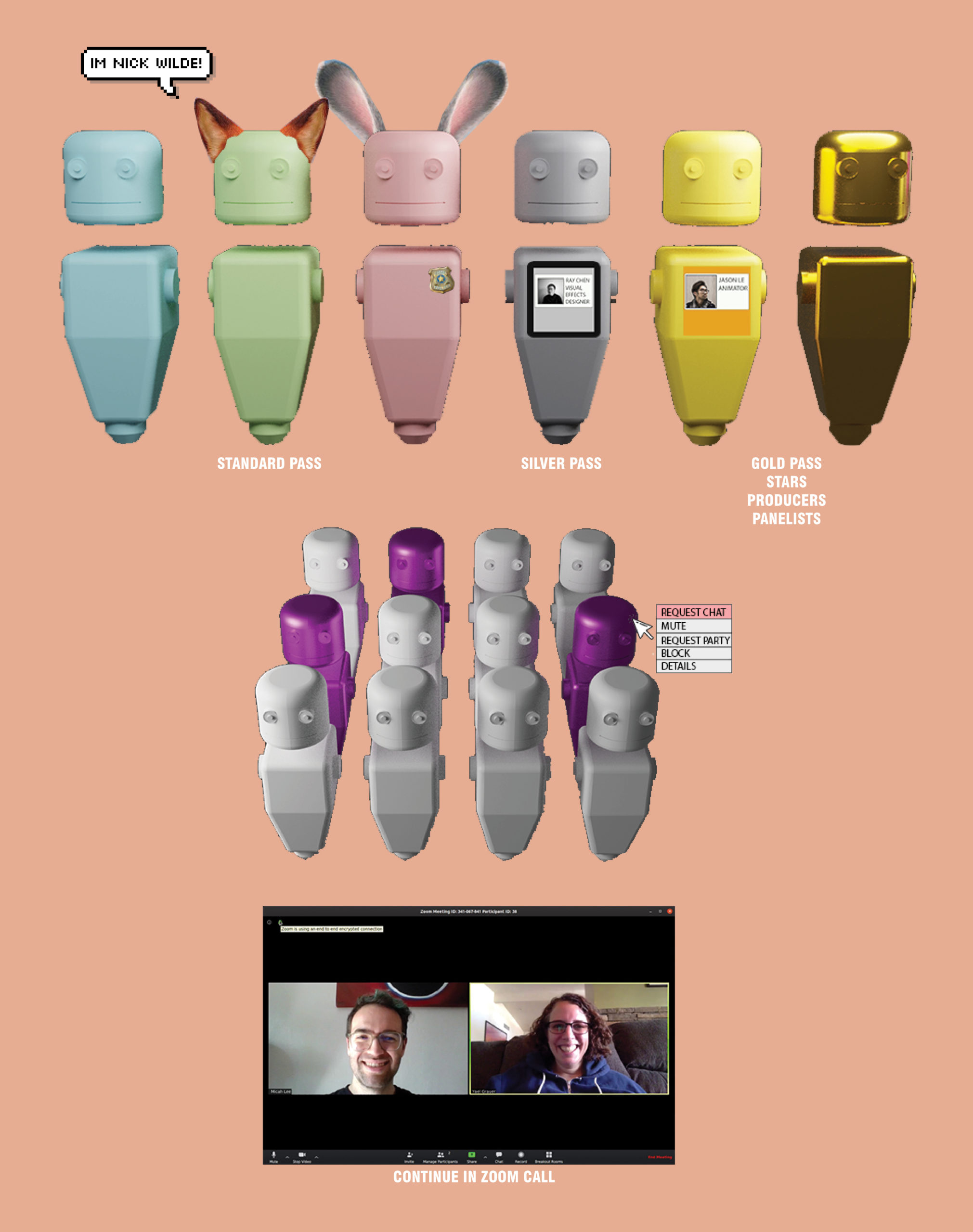 VIDEO: Screen capture of a flythrough in the virtual lobby space. 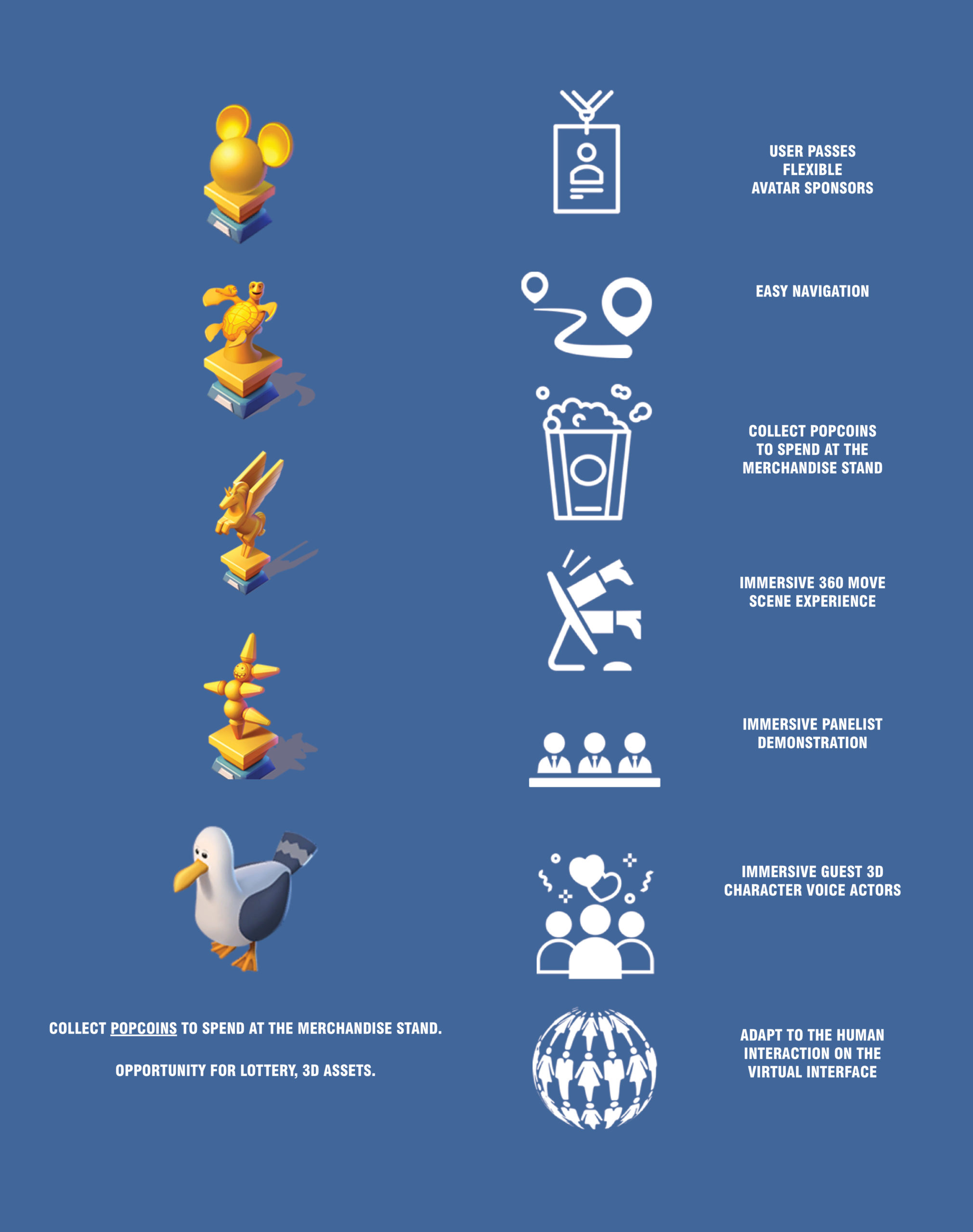 Immersive networking is the core of the Cyberfilm Festival where online human interaction meets opportunities provided from the 3D animated film industry. People can immerse into the scenes of their favourite 3D movies and learn about the production, process, concept and development behind it.

See it in Hubs

If you have a VR headset, Google Cardboard or even through your internet browser, you can join and explore the lobby prototype space in a social VR setting. Follow the TOUR UI to learn how to navigate or read the Mozilla Hubs tutorial here.

You can use the WASD buttons to move and Q and E buttons to rotate your view. Press spacebar and click to share emoticons or find locations to teleport to.

We play with key visual elements from the film industry to create the fantasy of a virtual movie festival: cubic dance floor lights, neons, popcorn, billboards, and, of course, the famous red carpet. 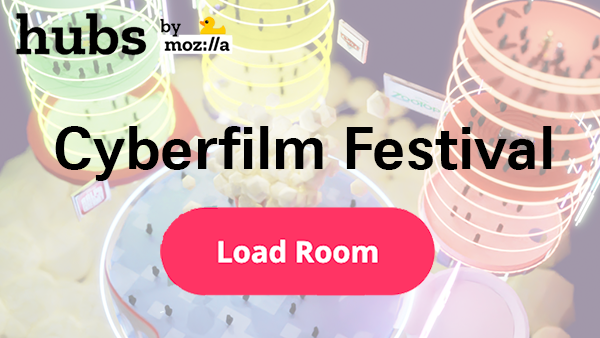 We play with key visual elements from the film industry to create the fantasy of a virtual movie festival: cubic dance floor lights, neons, popcorn, billboards, and, of course, the famous red carpet. 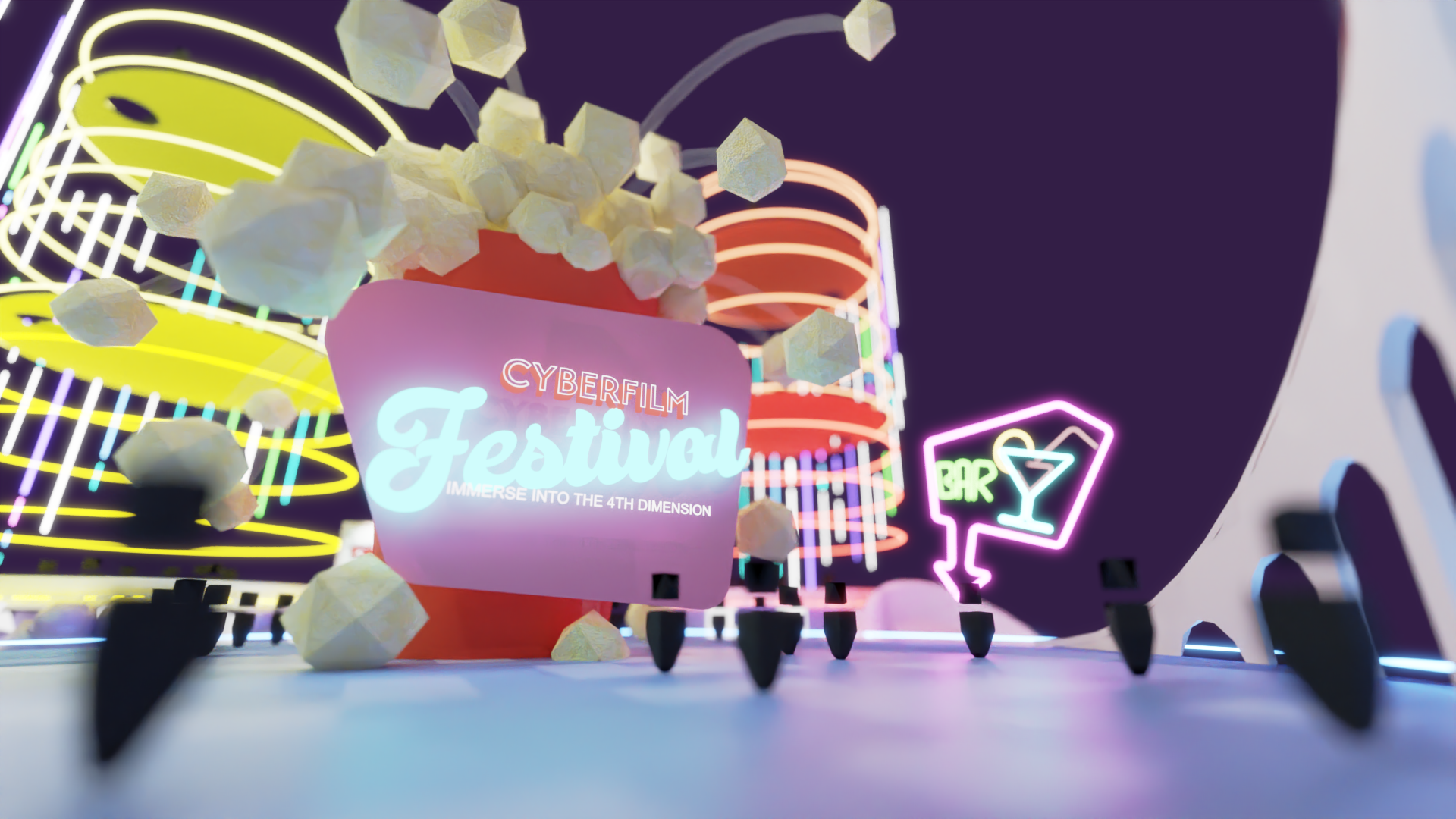 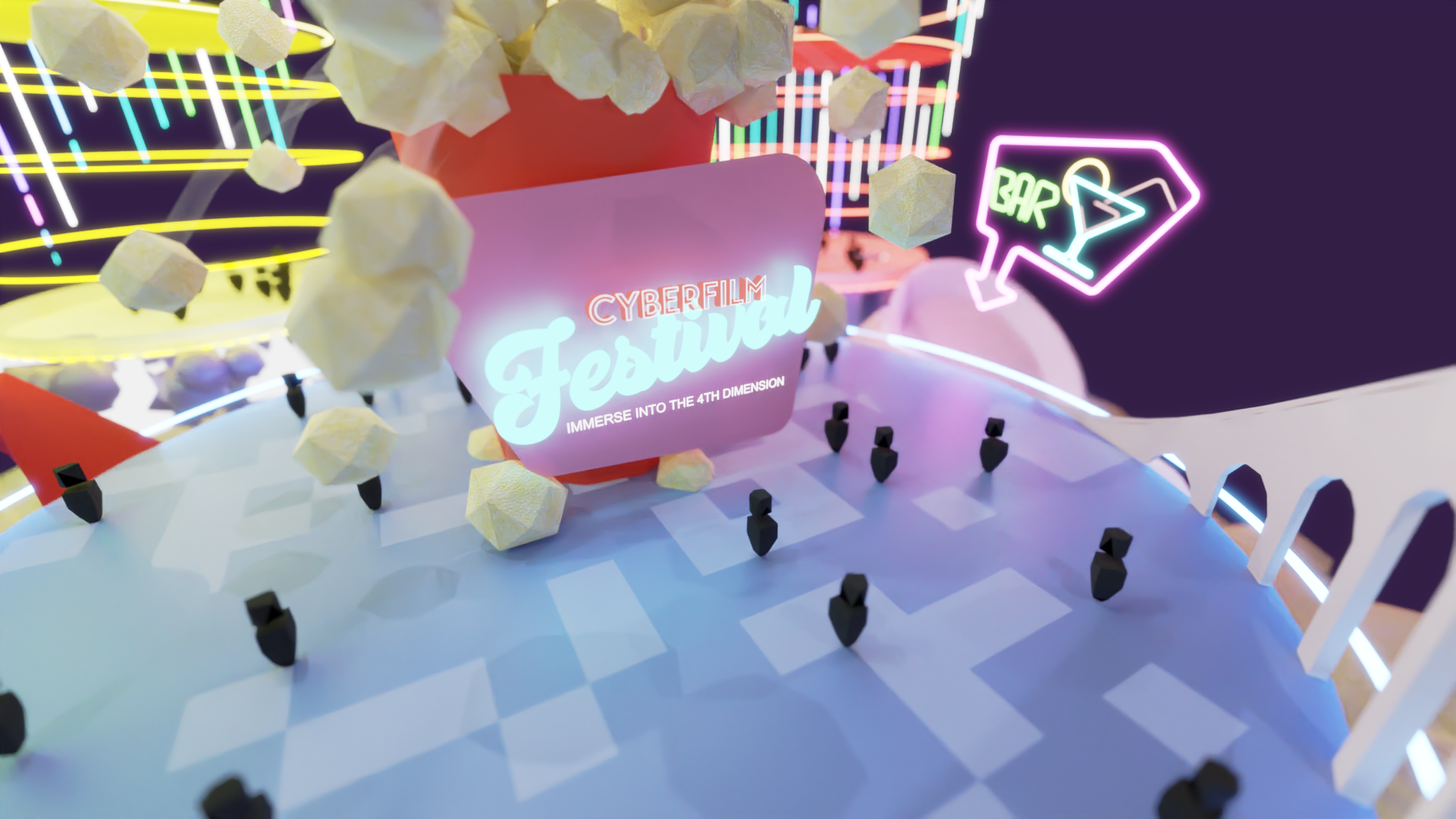 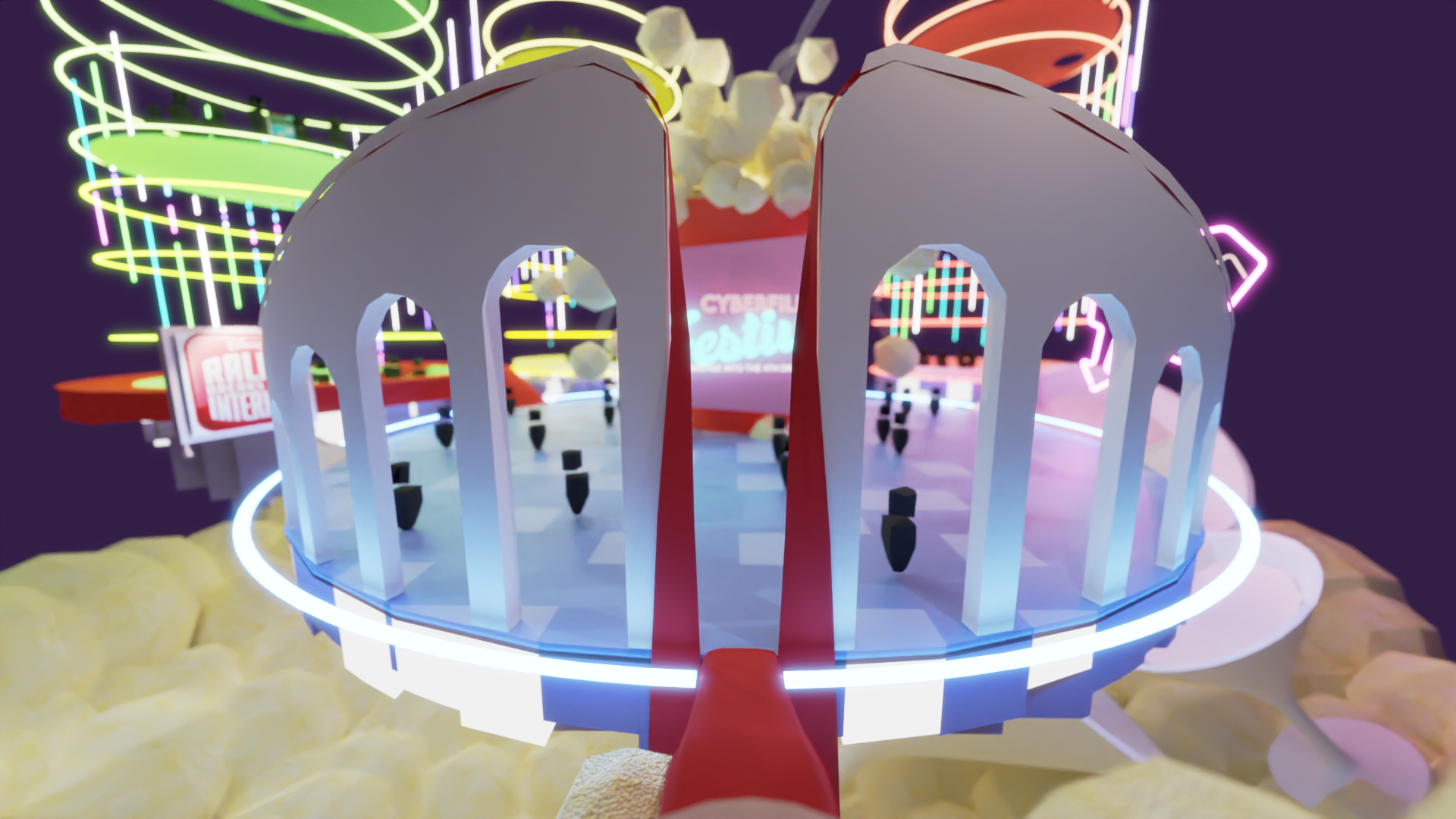 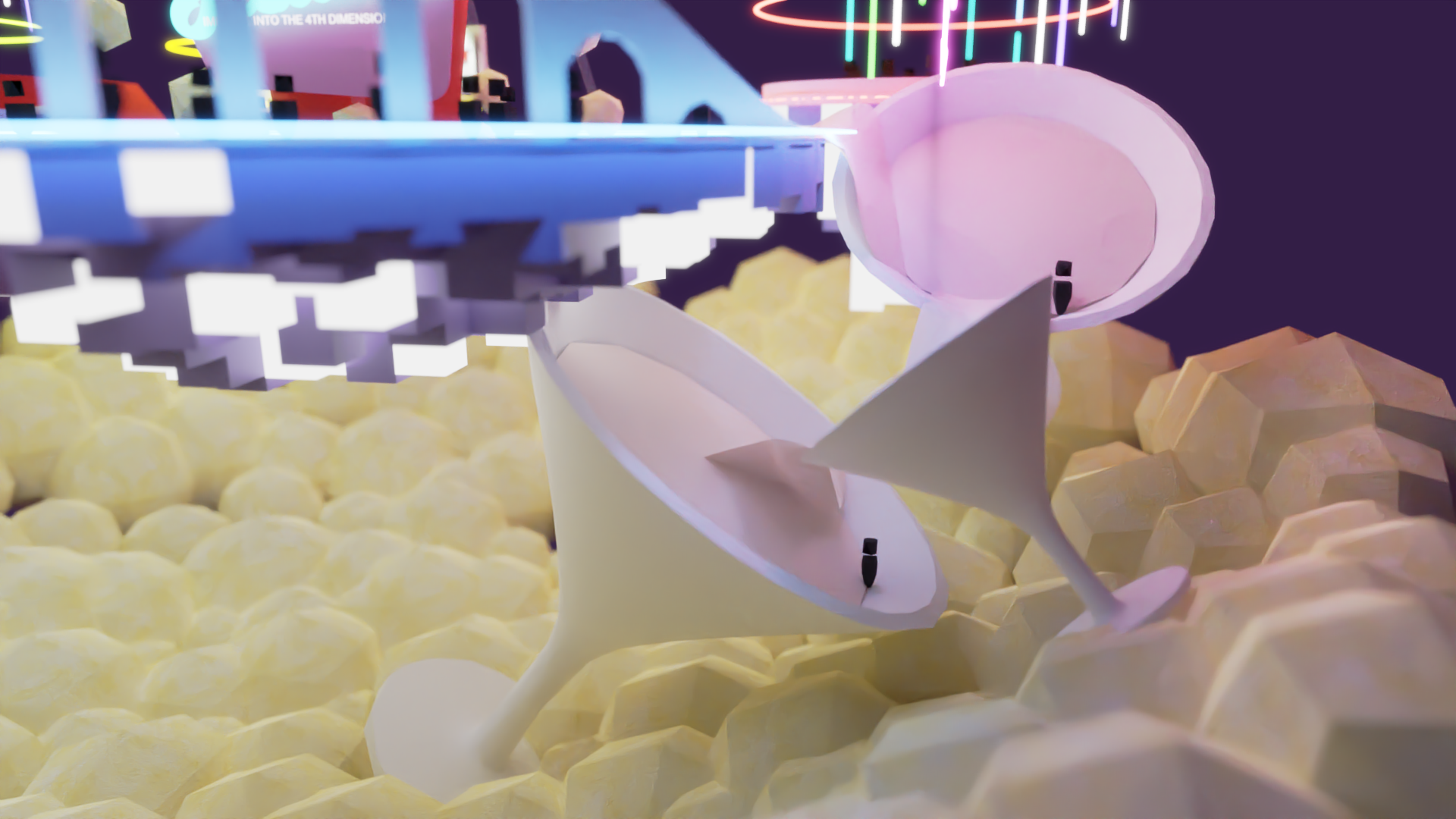 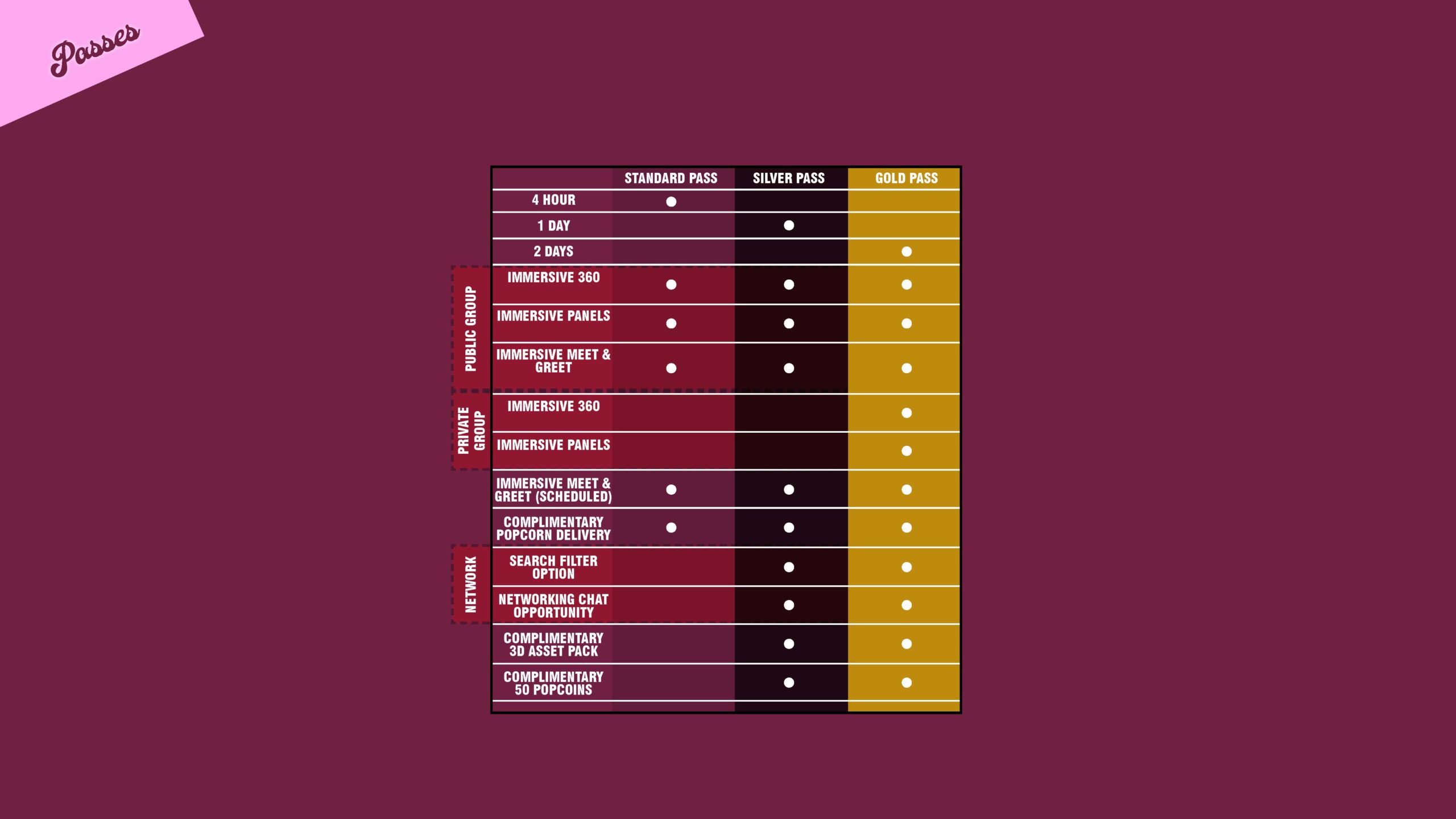 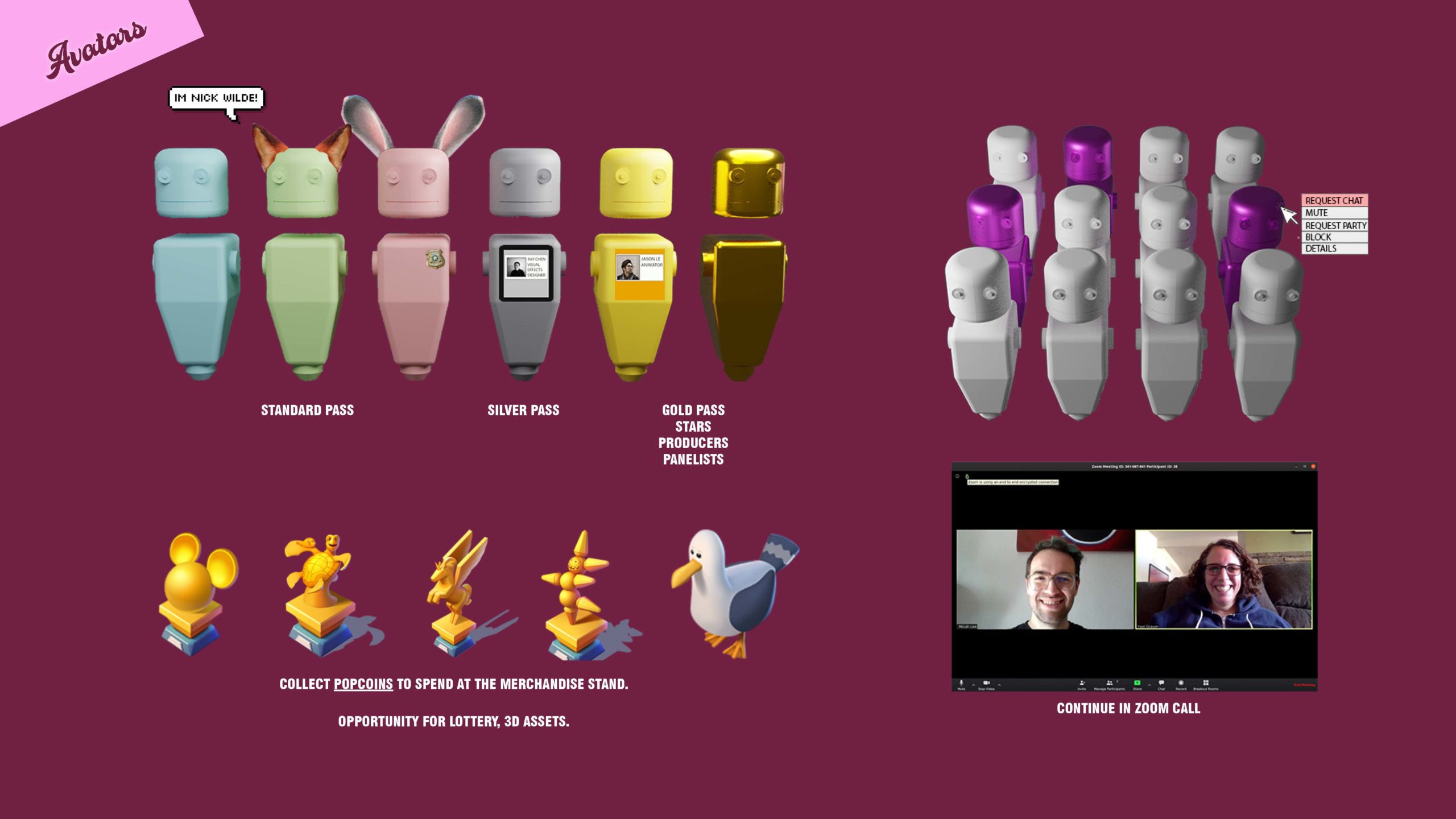 AVATARS: Avatars are designed according to the different passes and 3D assets can be won during the festival. 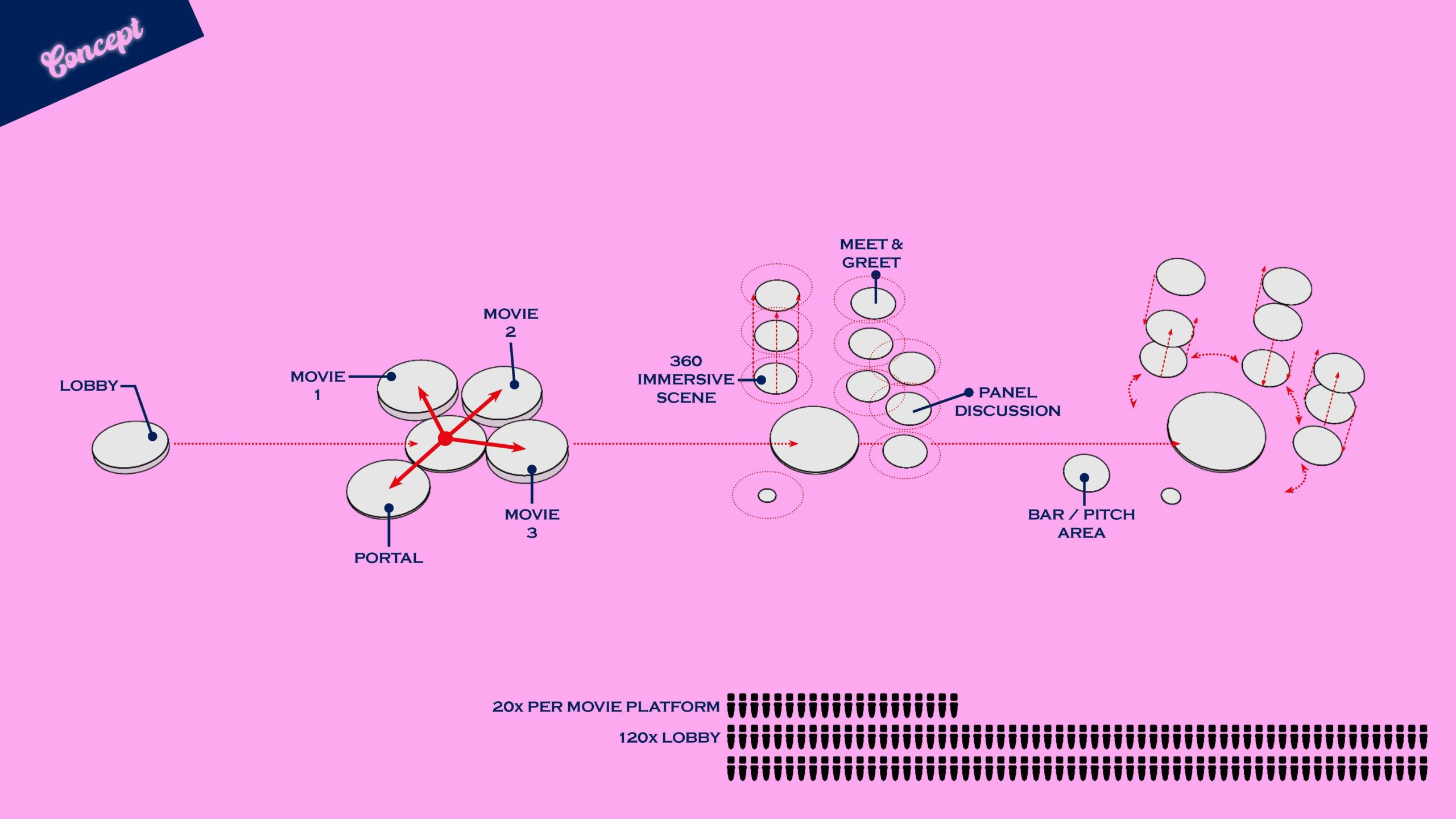